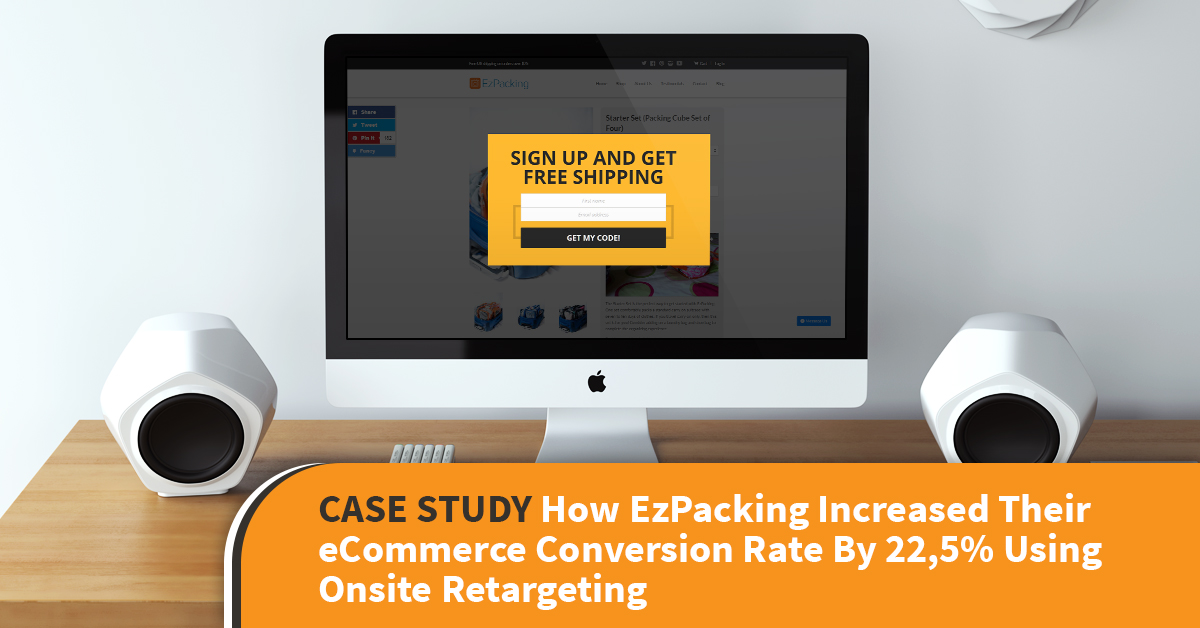 The very first stages in a life of an e-commerce store, are crucial as they determine the future success of the online business. Therefore, the proper way is to nurture the new visitors who find their way to a site, which by the end improves the chances of the first conversions significantly.

However, it is not easy to identify the best method to engage the new audience, since those visitors may not trust the site enough to initiate buying straight away.

OptiMonk has been designed with an idea in mind to engage the visitors regardless of the site’s life stage. It gives a chance to segment the visitors based on their needs and behavior to broadcast the most relevant message to them. In this case study, we’ll show you, step-by-step, how an ecommerce store increased their conversion rate by 22,5% in 3 months only!

EzPacking.com is an online store that sells packing cubes to simplify life of those who love travelling but at the same time find it important to organize their travel bag properly.

As a relatively new family business, they started using Onsite Retargeting to engage new visitors and persuade them to complete purchasing immediately.

They achieved astonishing results using OptiMonk. In this case study you will learn how exactly they attained their goals with Onsite Retargeting.

We’ll show you exactly how they:

..all by using onsite retargeting for 3 months only

The Business has started not that long ago. Their first main challenge was to keep the new visitors on site without having them bounced immediately from the landing page, and from the product pages as well.

The website is very well structured and includes beautiful illustrations of products with their detailed description. An extra point is that the owners of the page included a very friendly introduction page, allowing their new visitors to meet them properly and build trust before buying the product.

Allow me to state this, even the most professionally edited new website may face hard times convincing visitors to make a purchase. And the result is losing potential buyers as they simply leave the site without leaving even a trace.

In order to get the most out of their potential buyers, Ezpacking decided to give Onsite Retargeting a try. Lets see how they achieved their results.

Probably the hardest task of an e-commerce store owner is to convince the new visitors to open at least one extra page instead of leaving from the landing page itself. For the purpose of  increasing the time spent on the site and introducing the best deals. A traffic redirection campaign was used among the very first campaign.

It was meant to keep the visitors on site and at the same time increase the number of visitors on a page that includes one of the best offers that EzPacking has.

Here’s how it looks in action:

The aim of the traffic redirection campaign is to show a special deal to the visitors which they haven’t seen before. Indicating a short text or asking a simple question could raise the interest of the abandoning visitors so that they will more likely click on the button to continue browsing. The objective of the offer is to show them an existing deal offered by the website which they have never seen before.

As there are two pages which include the best deal, EzPacking ran an A/B test of the campaign to measure which of them raise the visitors’ attention more.

As a result of an A/B test the following results have been reached:

The difference between the conversions is not significant, but with an equal number of impressions it turned out that the winner is the second version of the campaign. The A/B test made it possible to measure it by displaying the variants to the visitors randomly.

The goal was to catch the visitors attention before they leave so that it displayed on exit intent: 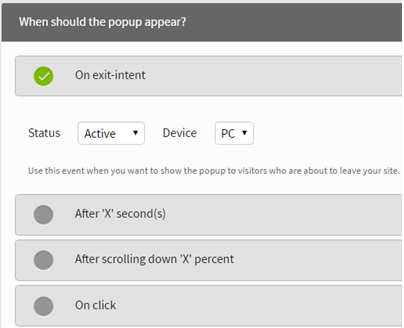 The popup displayed maximum 2 times and only those who spent at least 5 seconds browsing the sub-page. This allows making the popup user-friendly: 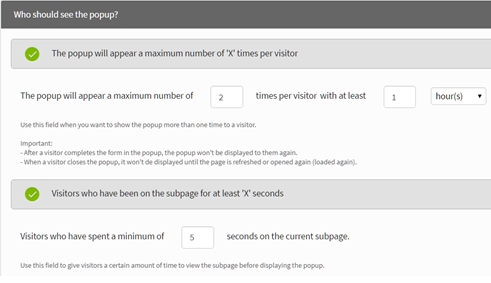 By using this campaign EzPacking managed to increase the number of pages opened and time spent on the site by 3 times.

Similarly to many e-commerce sites, EzPacking had many window-shoppers who checked the products but never ended up buying. Those visitors who reached the level to check the product pages are the best prospects who can be convinced to sign up for the newsletter in exchange for a special deal.

In contrary to standard popup overlays, EzPacking used a full screen template which is proven the increase the conversion rate even more! The reason for it is that as it covers the entire screen of the page, the visitor concentrates on the offer itself instead of the background page. Therefore, the chances of conversion are higher. 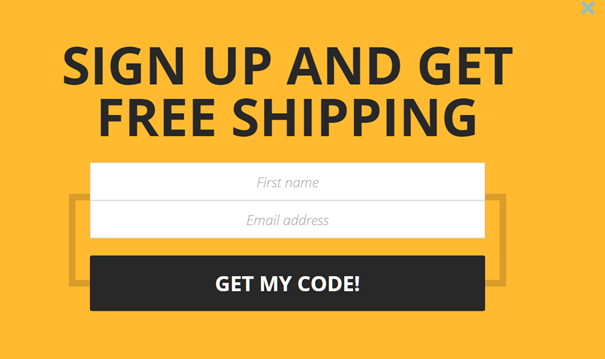 All the subscribers got their special discount code for the free shipping via e-mail after the subscription.

The deal was offered to new visitors only who then later were convinced to purchase via e-mail:

The popup displayed to new visitors only and was shown after 5 seconds browsing the website, as its aim was to raise the visitors’ attention about the offer before they are too deeply engaged in browsing the site: 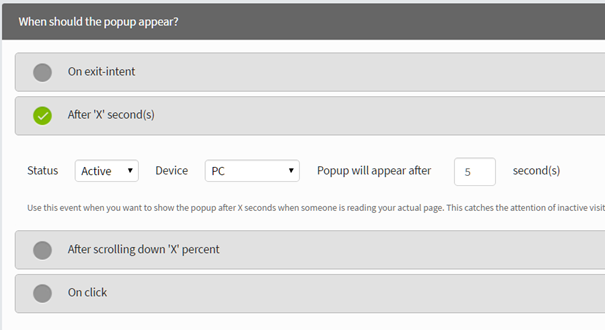 To make sure that the popup overlay conducts the new regulation of Google, according to which displaying full screen overlays on mobile devices may ruin the visitors experience, this type of the template displayed on normal desktops only.

Plus, the integration between the campaign and Active Campaign e-mail marketing system made it possible to e-mail the offer to subscribers immediately:

Within only 3 months of using OptiMonk, EzPacking made a significant increase in conversion rate.

Next to running a full screen campaign for visitors who browse on normal PC, taking into consideration that EzPacking has a significant traffic coming mobile devices too.

For that, an alternative template was used to attract the mobile audience which is Google friendly: 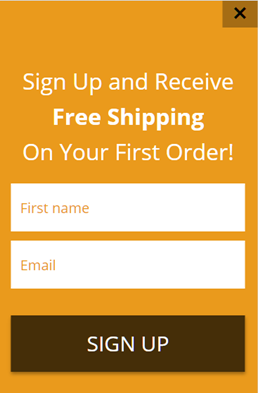 The campaign settings used were the same as of the campaign for normal desktops.

As a result, the desktop newsletter campaign increased the subscription rate by more than 8% while the mobile campaign by 4%.

Despite the fact that EzPacking.com was a very new site when started to use Onsite Retargeting it has proven to be successful at the early stages of life for e-commerce sites too. 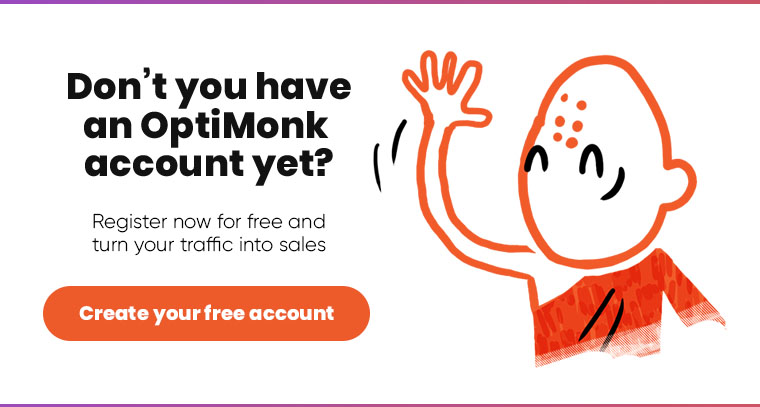 Create a free OptiMonk account and see the results for yourself. Stop losing customers today!